Friday 4th April 2008, is the day that I will be doing my reading as part of the DLR Poetry Now Festival (www.poetrynow.ie). That’s right, it’s getting closer and I have been looking forward to it since I found out about it in January…

As my life is one long search for irony, I have decided that I am going to commemorate this in verse and present it to the Children I read to as part of the festival… I will put it as part of my blog when this has been achieved…

Miniature Melanie from Melton Mowbray
May have been small but she could really play
A mean game of football. She played in the park
With her friends, Michael, Matthew and her brother Mark.
More and More people came to join in,
But they’d get upset as her team always did win.
And they couldn’t believe that this small female
Showed such great skill that they all did fail
To take the ball off her, she just couldn’t be caught,
If she was in danger, as a last resort,
She could run through their legs, due to her size
And she’d be away before her opponent would realise.
But the fact that her team was always triumphant
Didn’t always work out the way Melanie did want
Sometimes no one would turn up at all
And all she wanted to do was to play football.
So she goes home and is upset,
But she has a plan that she uses to get
The boy’s playing football with her again,
She plays really badly on purpose and then
They are all happy and after a while
Melanie decides it’s time to turn on the style.
She plays really well and it always does seem
That the best team to play for is Melanie’s team.
But the other team soon get fed-up of losing,
So not playing football’s the decision they are choosing.
So Melanie play’s badly again and I think it’s a shame
That she has to do this just too get a game. 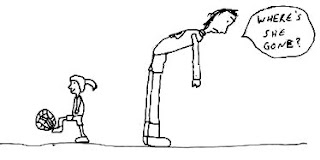 How did your reading go? Did you see any of the others? I managed to catch a couple (not your though :()