Myself and my wife, made our way down to Kilkenny in an evening trip that consisted of Luas, Train and Taxi. It was a tired Poet and his wife that sat on the train.

We dined on the train as we knew I was going to be in no mood to go around searching a city we’ve never been to before for food. Included in this were two bananas which seemed to obsess a man on our train who had had about three cans of Bulmers…

’Have you any Banana’s for us?’ he constantly asked us despite constant negative responses… ‘I want a Banana…’ He repeatedly said.

He got off the train at Carlow and I resolved never to eat a Banana on the train again, it always seemed like an innocent pastime…

We were staying at a guest house called Fanad House, which I will strongly recommend… Lovely nights sleep and even lovelier breakfast with Delayed Coffee.

Brenda from Kilkenny Libraries, picked us up early in the morning and we then were taken to Loughboy Libraries…

47 Children, all of the male gender, came to hear my poems and songs at this library… I think it went exceptionally well… I say think, because due to only having 45 minutes each session and the size of the group I was unable to have the comment sheets filled out during the session so my wife gave them to the teachers and was asked to have them filled out when they got back to school… I thought this was a good idea and I did it for the next sessions as well. Certainly some of the Children told me it went well.

The fact that I am a Tottenham fan and I have to announce this during my football section was met with much amusement due to us being bottom of the premiership, also I was asked to sing songs about many other teams, but I have to say in this blog, that will not be happening.

When I entered the Library I was met with a wonderful display in my honour and this can be seen below. 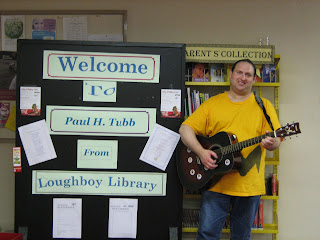 After the reading, we had the a quick Coffee and some soda bread before we were driven too Graiguenamanagh library, and again I read to a group of Boy’s which I can, again, only assume went well. During the Limerick section, I had a queue of Boys wanting my autograph, which obviously pleased me. With this session and the Baldoyle Library reading, I have started to have a Q & A session afterwards, they go well, I think I’ll keep it in.

After this reading, we were taken by the Librarians to a nice, again recommended if anyone is in Graiguenamanagh, coffee shop/café called The Coffee High.

The next group re-balanced the gender audience as they were all girls and again a wonderful reading was had… There was an enquiry as to whether my stuff can be viewed on youtube, and I responded in the positive. After the reading a couple of Girls stayed behind in the library to look at the internet and I saw that they were on youtube, I was hoping they were looking up my stuff, but it was actually the Jonas Brothers, oh well.

Graiguenamanagh is a lovely town, and after the reading my wife went to photograph the river, whilst I wet to an Antiquarian Book Store in the town.

We decided to stay in Kilkenny an extra night as neither myself or my wife had been there, and we ended up having a wonderful time visiting the castle and also I had my first taste of tapas at a lovely tapas restaurant (again recommended) called Grapevine… We left Kilkenny deciding we are definitely going back in the near future…
Posted by Paul H. Tubb at 1:23 AM