I write this whilst travelling from Cork to Dublin, it is written the old fashioned pen and paper way… I hope to have this typed up on Saturday, but I will not promise…

When I get to Dublin I will travel up to the final County I will be performing in, Monaghan.

I hoped to write a blog after every day, but tiredness became me too much last night, so part three of my festival blog will encompass 2 days of performing and one of travelling.

Anyone reading this far will have the impression that that I have been experiencing new things during this festival… Well this blog will document a wonderful trip of familiarity as well as new experiences. This is my fourth year doing the Children’s Book Festival and there has been one constant through each four, County Cork which is where I’ve just been.

Travelling down on Monday afternoon taking a journey I’d taken many times. Arriving at a B&B We had stayed in for the last two years. In the evening, my wife and I walked down the familiar St Patrick’s Street, over to the familiar Oliver Plunkett Street to go to a favourite restaurant of Ours, The Indian Palace. Both me and Daria love Cork, it is where we both lived when we first met, in fact it is where we first met…

Even the first library visited was a Library I had performed in before, Charleville… When the girls arrived, I asked them if they had encountered me before and the response was 100% negative. I deduced from this that I was either so boring they’d forgotten me, or that it was a different class I read to before, I will chose to believe the Latter.

I do feel sorry for people who come to this blog hoping to find a disastrous and humiliating experience for me, because I am sorry to report that it was another successful performance. I was a bit worried about the reading due to the doom and gloom predicted by Ryan Tubridy and his guests on his Radio show that was on in the car on the way down. I was questioning myself, whether I can be funny, knowing that Brian Lenihan might be putting a tax on it later…

Luckily it didn’t affect me and I even got a joke out of it, when I read a poem called ‘Christmas in July’ I ask if anyone can tell me when Christmas day is, a young girl responded with, ‘25th December just around the corner.’ I then responded with, ‘Well that depends on whether Mr Lenihan decides to cancel it in his budget.’ This statement was met with horrified gasps and even a call for industrial action on the pupils side…

Again, Comment sheets were not used during the reading, but many of the children informed me that an enjoyable time was had by them.l

The next Library was Millstreet Library where again, Poetry, Jollity and Rock’N’Roll combined in a wonderful way. This class was all boys who really enjoyed the football section, and again requests were made to me to write poems for other football teams. One of the teachers is a Tottenham fan, so hopefully he appreciated it to. I included a Q+A session again at the end, which soon descended into a joke telling session which was fun.

It was an exceptionally tired Poet and Wife that arrived back in Cork City, in fact neither of us felt good at all and we realised rest was the best thing for us. Unfortunately I had errands to do on McCurtain Street, although this meant I could buy a Coffee in the cafe ‘Cork Coffee Roasters’, which is a Café I would highly recommend. On my return, a decision was made to rest and I decided not to write out a blog. We spent the evening in having Pizza and waiting for Prison Break and Desperate Housewives to come on the Telly… But at 2100 hrs, we discovered that Prison Break was not on, Victoria Beckham: Coming to America was on instead, which made us feel a lot worse.

The following day meant a change of T-Shirt. Now I know I mentioned in a previous blog that I will talk about my Charlie Brown T-Shirt and anyone reading it will probably wonder why would you need to explain a T-shirt to us? Well I’ll explain and hopefully that will answer that question for you. Last Thanksgiving, I went to America to spend time with my In-Laws and wife’s family. Before I went, a question was asked if I would provide some idea’s regarding gifts I might like at Christmas, and I made a suggestion of a Charlie Brown Zig-Zag T-shirt due to my Love of all Things Peanuts. When asked by, her family, ‘Why would Paul want a Charlie Brown T-Shirt?’ her response was, ‘I have no idea, maybe he wants to wear it for his performances?’ When she informed me of this conversation, I replied, ‘No, it’s because Charlie Brown is Cool.’ But then I thought what a great idea… So anyone who has seen me perform comedy, poetry or song at the end of last year and all of this year, will have seen me wearing my Charlie Brown T-Shirt… Now that may be good for the occasional Comedy night or the occasional reading, but if I was to do that for the Children’s Book festival eventually the T-Shirt will get up and do the performance itself… So I needed a change of T-Shirt in Cork so that I can wear it in Monaghan. Although I do believe it is rather fetching, do you? 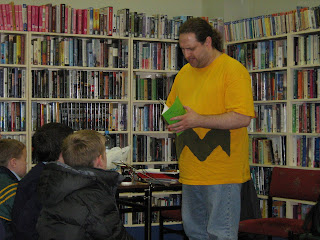 The two readings today were in Fermoy and Mitchelstown again both went exceptionally well. In Fermoy a mixed class danced along to ‘New Shoes Blues’ and ‘Joe the Wriggly Rock’N’Roll star’, The Poetry was also enjoyed and I received many enquiries as to where my poetry can be purchased. I also got many interesting questions, including, ‘Why does Helium make your voice go Squeaky?’ I had no idea.

The next class were all Girl’s who all wanted my autograph at the end. I got many great compliments including various requests to go on X-Factor. When I tried to explain that Simon and Louis would not agree with them and besides I do not like queuing, they informed me that they are sure I would do well.

So I felt really good, and tired, as I was taken to the train Station to get the train, and this is where I am now… I’ll write from Monaghan.
Posted by Paul H. Tubb at 5:48 AM