I have spoken of my and my wife’s, love for Cork before, it was the place I moved to when I came to live in Ireland and there are so many things within Cork that we love to visit…

And fortunately, the Children’s Book festival allows me and my wife, to revisit Cork on a yearly basis. For all the years I’ve been doing the CBF, I’ve been in Cork county Libraries, all except this year, but Cork City Libraries are the one’s I shall be reading at this year, so the Poet shall go to Cork and his wife shall be accompanying him, which means a visual record of the event will be made and you do not just have to take the ramblings of myself as proof the events I am talking about happened.

So we got to Cork early Sunday afternoon and went for a walk through a few old haunts. Coffee was had in my favourite Coffee shop, Cork Coffee Roasters, (See picture) where we purchased some ground coffee as well.

My wife spent the evening with a friend of hers, whilst I did some work on Sunday evening… and then came Monday, which was the day of my first Cork readings this year.

And that is why anyone reads this blog isn’t it, you want to know about how the Children are enjoying my poetry and song, not about the poet and his wife and where they drink their coffee… But if I can be allowed one last digression…

on April 20th 2005, a poet and his wife began a journey from their house to Mayfield Library as part of the World book week celebrations. The poet was nervous as this was his first ever reading and he really hoped it would go well, after Mayfield it was on to Grand Parade for his second ever reading… This poet was me, so Cork is more than just my old residence and somewhere I love to visit, it is the place that I began what I am doing now.

Grand Parade is decorated with Balloons and posters and looks really nice. I set up my stuff, and wait for the Children to enter.

This may not be my first performance at Cork City Libraries, but it is my first with a guitar, and as the Children are seated, I begin with the Coat-Hanger Song and it is well received, so bang goes that myth about me not being able to play guitar well in Cork City Libraries. The session as a whole goes really well, and Limericks are well written by all… My poem, ‘Unwanted Spider’ seems to generate a lot of questions, including a young girl asking me why it wasn’t just flushed down the toilet or the plughole? I explained that there would have been no poem if I had done that, but I did suggest that this may be the scenario of another poem…

After Grand Parade I was taken to Bishopstown Library, a Library I have never been to before, and it was the venue of another great performance. Limericks and questions were good and after the performance a teacher asked us if she could purchase one of my books, and we hadn’t brought any with us… Oh Well. A video of me reading, ‘Tested on Animals’, from this session can be viewed below, it even has a bonus joke thrown in.

This was my last reading of the day, so me and my wife did many Cork based things in the afternoon, which I’m sure you all want to read about, but you won’t. Not here anyway.

The following morning, after an identical breakfast, we were then driven to Mayfield Library where it all began. Mayfield Library seems a lot bigger than it did before, but I was assured that no growing took place in the four and a half years since we were here.

An all boy group entered and seemed a bit shy, they didn’t seem to want to join in with the Coat-Hanger song, but they soon warmed up and seemed to enjoy my poems and songs. A Rock’N’Roll song was requested from me and it just so happens I had a perfect one to give them, my song about a Rock’N’Rolling Worm.

We were then taken to, Tory Top Library, another one we had never been to. We met up again with Eileen, the Librarian who was Children’s Librartian back in 2005 and who, therefore, gave me my poetic break, so that was good. She is mentioned in the acknowledgements of my book.

An all girl class came in an again an enjoyable session was had. This was a particularly giggly group and that is always good to hear when you intend to provide jocularity with what you write.

Our final destination of the day, and of Cork for this year, was Douglas Library. Now I have been there before, but it had changed so much, that it was like a new Library.

Our final class was again all boys, and an enjoyable time was again had. The Q & A session descended into a joke telling session and that is never a bad thing.

So then we went to Kent station and out of Cork for this year. Although we had such an enjoyable time, that we have decided we would like to come back before Christmas.

Home to Howth, and then on to my final destination for the CBF 2009, Donegal.

Photos from Cork can be seen below. 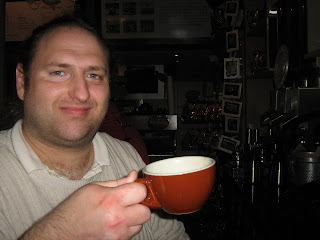 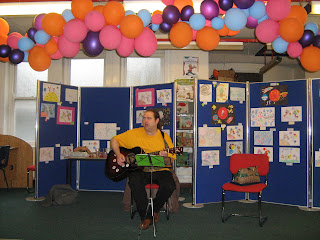 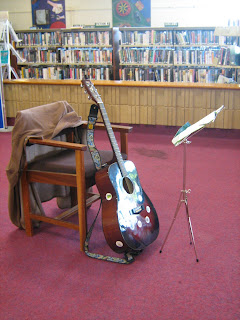 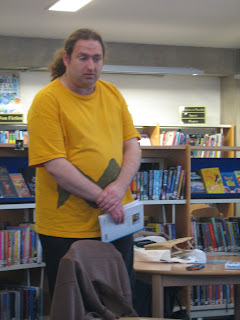