It's the year of Anniversaries Charlie Brown

10 years ago on February 12th 2000, the world lost a comic genius and a great Cartoonist. Charles M Schulz died in the year when Peanuts celebrated its 50th Anniversary. That makes this year also the 60th Anniversary of Peanuts.

Now I have written about my love of Schulz, Charlie Brown and All of Peanuts before. (See Here) but I thought as 2010 starts, a year with anniversaries, I’ll dedicate another blog.

A younger version of myself was allowed to use a book token he received as a Christmas gift, to buy a book to take on Holiday. This was the first time an opportunity like this had ever been given to me and I knew exactly what book I was going to choose. Entering a bookshop in Bishops Stortford, that if memory serves me correctly was called the Castle Bookshop, I went straight over and picked up a book called, ‘It’s Raining On Your Parade Charlie Brown’. This was the first book I ever purchased and the first opportunity I’d had to read Peanuts rather than to view the cartoons on television. I loved Peanuts then and I love it now.

This simple act alone ensures that I owe Charles Montrose Schulz a huge debt of gratitude, add into the mix the humour, the wonderful writing, drawing and the hours of enjoyment his art has given me, than the debt develops to gargantuan proportions. When I’m feeling down these days, I simply have to pick up my copy of, ‘You Really Don’t Look Fifty Charlie Brown’ and read not only the Cartoons, but the text Schulz inserts between Cartoons to explain where ideas came from and other biographical data.

Is there anything more American than Charlie Brown and his friends?

Nobody, apart from Wodehouse, influenced my work more, and I wonder what he would have thought about my writing? Would he have liked it? I’m not sure and I never will be. Although I think it’s safe to say a certain person would not enjoy my work, (See Below). 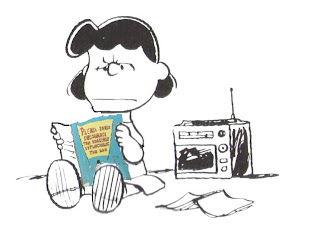 Would you mind linking to our blog:

I will not be linking to your blog.

yeh that would suck