Although I have yet to see Guy Ritchie’s version of Sherlock Holmes, I have recently begun to re-read the Sherlock Holmes Stories and Novels and I believe the fact that this movie put the exploits of Holmes and Watson before the public again, is the reason why.

My first exposure of the world’s greatest detective was as a young man watching the Baker Street Boys on CBBC and also reading the Arthur stories written by Alan Coren. I then remember the series starring Jeremy Brett, but I didn’t explore the literary side of Holmes until I was 20 years of age and loved to read the stories once I started. As I said at the beginning I’ve recently started to re-read them which indicates there has been a Gap, and there has been an inexplicably large gap that I needed the help of Mr Guy Ritchie to alleviate.

One thing that has struck me whilst reading the volumes is there always appears to be a fire burning in the rooms of 22IB Baker Street and also the copious amounts of tobacco consumed in the same residence. I can calculate, using the Sherlock Holmes method no doubt, that the stories of Sherlock Holmes tend to be set during cold weather and that both he and Watson were heavy smokers.

I mention this because, when I read the stories I always feel that I should be sitting next to an open fire with cigar to get the full effect. The recent Cold Spell we’ve had would seem to be the perfect place to do this except there are, of course, problems which present themselves, 1) We do not have an open fire, 2) When I do have one of my occasional cigars (Special occasions and celebrations only) I’m sent outside to smoke it so that I would never be next to a fire even if we had one. There is a fire in one of our favourite Howth Pubs, (The Bloody Stream) but thanks to the smoking ban this is not feasible either.

Oh well the stories shall be enjoyed regardless and I will not leave it too long, even though I do not believe that I’ll be going to see the movie out now, wait for it to arrive into my fire-less living room through the television.

Photo of me, Cigar and Sherlock Holmes... 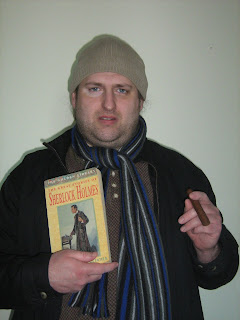