And today, quite by accident, I found out that Bod was in fact a boy.

I think the main reason that I was under the assumption that Bod was in fact a girl, was because he wears triangle shaped attire and as a child, all female drawings by myself were attired the same way… (See Illustration) 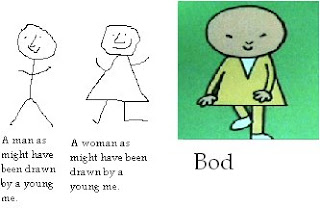 All the years I’ve wasted believing this, I will never ever get back… So I will have to finish with a poem about another female who knows what she wants.

The little Girl at number two
Said to me one day, “Please call me Sue.”
I replied, “Why should I do that?
After all your name is Pat.”
She said, “My parents gave me that name.
I would never have chosen the same.
I think it’s rude, I feel insulted,
That I was never ever consulted.
After all it is me who’ll have the strife
Of living with this name for the rest of my life
So I believe it would have been fair
If a decision is made that I should have been there.
The only reason as to why I wasn’t confided
Is because I was to young when the name was decided
But if they had named me temporarily
We could have changed it to what I wanted when I turned three
But now Pat is permanently my name
And my parents are to blame.
I want to be called Sue that’s what I have planned,
After the singer from my favourite Pop Band.
Besides what has it got to do with you?
If I ask you, then please call me Sue.” 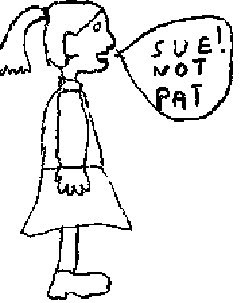 I think the lack of hair was a clue.
You've also made me remember Alberto the frog so I'm going to have to track down some milkshake.
Susan