Strong willed females have actually featured quite large in my poetry for children, There was Miniature Melanie the wonderful footballer who featured a few blogs ago, then there is Pam (See Below) who knows what she wants, (Or rather what she doesn’t want) but she encounters another strong willed woman who unfortunately makes the rules and there are others as well… I think this influence comes from the strong independent woman I married…

I was thinking of this during the week when I found out that Geri Halliwell, member of the Spice Girls the band that taught girls it’s cool not to think for yourself, Has ‘written’ a collection of Children’s stories that in her word’s, ‘Passes the baton of Girl Power on.’

Oh heaven be praised, Children’s literature has been saved by a selfless individual who does not like the limelight…

I’d like to say this is said in all seriousness as Geri’s version f Girl Power is similar to mine in the way that they were both manufactured by a member of the male gender… Mine came from me and hers came from Simon Fuller and her books are rumoured to have been written by Jonny Zucker.

Girl Power hey!!! Here’s some more for you.

There is a girl called Pam
Who really doesn’t like Spam.
But it’s all her mother serves
And it gets on her nerves.
She said “I’m fed up with it, I am.”

One day, to her mother, she said,
“Mum can we have something different instead?
An alternative dish
Maybe something with fish,
And maybe some chips and some bread.”

“Why?” Her mother enquired
“Don’t tell me of Spam you are tired.
It’s all I’ve ever eaten
And its taste can’t be beaten.
To eat it’s all that’s required.”

“But I don’t like it.” Pam did state.
“And I really don’t appreciate,
To me you don’t give
Any alternative,
As there is nothing but Spam on my plate.”

Pam’s mother did not agree.
She said “An alternative is not necessary.
I’ve only ever eaten Spam,
And it’s made me what I am,
So eat it if you want to grow up like me.”

“Besides” continued Pam’s mother.
“As for alternatives there are no other.
A three year supply
Of Spam I already did buy.
So for the next three years, dinner I did cover.”

So for the next three years Pam
Did eat nothing but Spam.
But she discovered by chance,
That the taste of Spam she could enhance
By adding a spoonful of Jam. 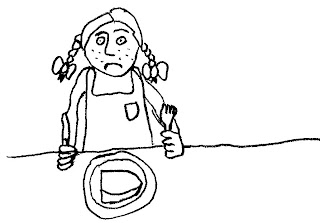